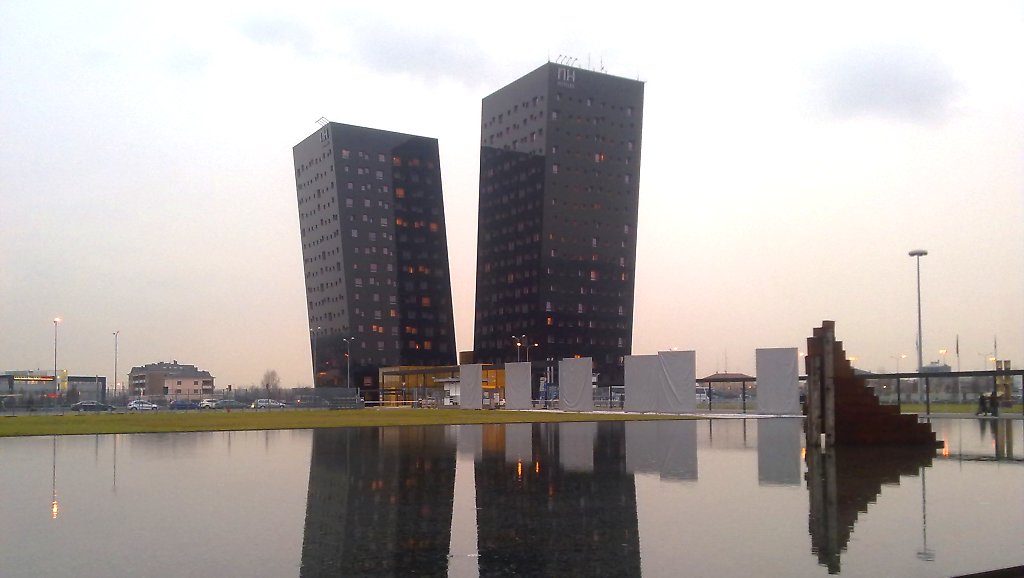 Our selection of 20 among the best hotels in Milan.
.:. We also provide separate short lists of moderate, expensive and de luxe hotels in town, as well as best choices of accommodation near the three Milan airports.

Situated halfway between FieraMilanoCity and the city center, it is housed in an old mansion converted into a hotel in 1969 and has undergone a makeover in the last few years. Don't expect loads of space, but it has all the features to make your stay comfortable. The 48 rooms and 3 suites, some of them overlooking a tiny garden with birch trees, are modernly furnished. There is a lovely Art Nouveau staircase. Bikes to rent, Internet point.

The ultimate in luxury. Created by architect Antonio Citterio, the Bulgari Hotel - yes, the jewellers - is a strone's throw to the Montenapoleone area. Inaugurated in May 2004, it has 58 rooms and suites, most of them overlooking Brera's botanical gardens, some with meditation corners... Pure and essential design, contemporary Italian furniture and precious materials: black Zimbabwe marble in the public spaces, Vicenza stone and Turkish Aphyon in the Spa, solid teak, durmast and oak in the rooms and suites.

It faces the Palazzo del Senato, not far from the San Babila subway stop. Completely renovated in 1996, some of the rooms, lavishly decorated and with Internet access, overlook Via Spiga, a quiet, pedestrian-only street in the midst of the Montenapoleone shopping area. The VIP clientele of the hotel includes the late Helmut Newton and the Dalai Lama. De luxe rates.

Only a few steps from the elegant Via Manzoni, it is owned by the Gallia family (which for fifty years ran the then de luxe hotel of the same name). It is currently managed by Guido Gallia, a fourth-generation member of the family. One of the most ?moderate' in its class, its appeal lies in excellent service. The Conte Camillo restaurant is popular with businessmen who stay at the hotel. Conference and meeting rooms are also available.

On the busy Viale Monza, handy for the subway station, this hotel offers very good facilities. Don't be put off by the nondescript building: the interiors are elegant, modern, with touches of creative art here and there. All the bedrooms have recently been completely refurbished. Businessmen can take advantage of conference rooms, tourists can rely on attractive weekend specials.

An oasis of calm on a green side-street off the Navigli canals and just a stone's throw from the Roman San Lorenzo columns, where many bars and venues are located. Modern building and décor (just the lift happens to be out of service quite often), friendly staff. Ask for a room with a view (the Duomo). Restaurants, pizzerias and shopping within walking distance.

Some of the elegant 105 rooms and four suites enjoy a view over the spires of the neighboring Duomo. A recent addition, and an unusual one for Milan hotels, is the rooftop swimming-pool, enclosed by glass walls making it an all-year facility. Special packages with Italian hotels of the same chain. The Canova restaurant is popular with businessmen. Conference and meeting rooms are available.

Almost at the entrance of the busy Corso Buenos Aires, a stone's throw from the center and a few steps from the Porta Venezia subway stop, the Diana is a famous Milan hotel which opened back in 1908. Completely renovated in 1998, it has all the charm that comes with age. Among its features are a beautiful Art Déco lobby and lovely rooms, with real linen bed-linen, overlooking a garden dotted with magnolia trees. It is frequented by people from the arts, culture and fashion worlds, and shows are often put on here. Its Il Milanese... Curioso restaurant offers al fresco dining in summer.

The hotel retains the original interior décor and aristocratic atmosphere of bygone days. Inaugurated in 1863, it quickly acquired almost legendary status among Milanese hotels known worldwide. Famous past guests such as Giuseppe Verdi (the room he once occupied has been faithfully reproduced and is always in great demand) are recalled in pictures, photos and statues. The hotel's facilities include the Don Carlos restaurant and Caruso coffee-shop.

Small, old-established hotel, very central but in a quiet street, halfway between the Duomo and the Castle and a stone's throw to the Piccolo Teatro. Good value for money rooms.

One of the most moderately priced in its class, this Golden Tulip hotel faces the Giardini Pubblici and is in a central, but relatively traffic-free position. There are over 100 well-lit rooms renovated in a modern, cozy style and many overlook an inner courtyard with tables and bar service in summer. Regular clients, homey atmosphere.

Luxurious rooms and world-class hospitality within walking distance of the Corso Vercelli shopping area. Just a few stops by tram or subway and you reach the Castle and Piazza Duomo. One of the most 'moderate' in its class. Buffet breakfast and in-house Brasserie de Milan and parking.

Spotlessly clean, family-run hotel in a quiet spot just off the noisy Via Napo Torriani. All rooms have recently been refurbished; furniture is modern and bathrooms are a comfortable size. Breakfast is served in a bright breakfast room. The staff is well-trained, old-style. Conference and meeting rooms available for businessmen as well as ISDN phone lines. It's part of Worldhotels.

Close to the central railway station, the décor is modern and rooms have air conditioning. Colorful breakfast room and friendly reception.

A pleasant villa, located in a quiet area within walking distance of FieraMilanoCity and handy for San Siro Stadium. Its bedrooms and most of the premises were recently renovated. Conference rooms available.

Recently restored and raised to 12 floors, its façade is now in beautiful dark red Assuan marble. The 244 luxury Empire-style rooms all have Internet access and eight suites also offer completely marble-lined Turkish baths - the ultimate in relaxation. There is a fully equipped fitness center. The Casanova Grill restaurant is a favorite meeting place for Milanese connoisseurs.

This luxury hotel (established 1927) has all its 266 rooms and 133 suites in attractive 19th-century Lombard style. A fitness and beauty center has been installed at rooftop level (where there is also a 500 sq.m. Presidential suite with its own pool). The recently renovated Acanto restaurant offers Mediterranean cuisine and it is highly rated. There are variously-sized dining rooms as well as several fully equipped conference/meeting rooms, also available for parties and receptions. As of April 2000, a newly built 'Bridge of Sighs' connects the old building to the Principe Tower where rooms, in subdued Victorian style, are equipped with the modern technical facilities.

A stone's throw from the Giardini Pubblici and handy for the Central Station, it was built in the 1920s with innovative criteria by a national tourist association. Its original tourism vocation is to a certain extent maintained with very attractive weekend specials. The 300 rooms were recently renovated in a modern, warm style. Free shuttle service to and from Linate airport on weekdays.

Just a handful of rooms for this quiet, family-run hotel overlooking a green square. Within walking distance to the underground (line 1 and 2) and handy to the Central Station.

Small - starting from the entrance which may make you doubt it's a hotel at all - it is specially recommended for cycling enthusiasts and other environment-friendly individuals: the hotel offers its guests free use of a bike to get about town (Corso Italia is in the restricted traffic area, very close to the Duomo).