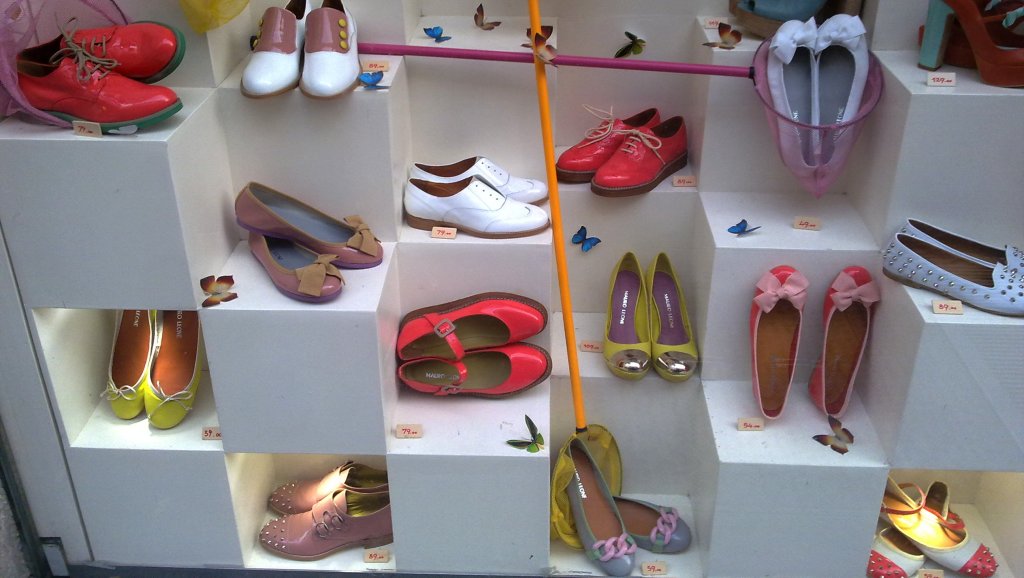 .:. Alviero Martini 1ª classe
Bags, suitcases, umbrellas, hats and apparel with the world maps the brand is famous for printed on them.

.:. Bottega Veneta
Its name in Italian means 'Venetian shop', and in fact the main branch is located in Vicenza. Their Veneta and Caba bags are well known. They also have clothing for both women and men.

.:. Bruno Magli
A large company based in Bologna which is successful worldwide. It also does a line of hand-made shoes.

.:. Car Shoe
The gentlemen drivers' approach to the shoe side of this life. In brilliant colors, too, Since 1963.

.:. Chiu
No Bucci or Mandarin Drake here, but the real McCoy. And the upscale prices you'd expect to pay for it.

.:. Fabe
Among the most active shops in town for the Tod's, Hogan, Car Shoe, Bikkembergs, Campanile, Ugg and La Martina shoe brands, as well as for Coccinelle bags. Since 1963.

.:. Fratelli Rossetti
Elegant shoes famous the world over for their comfort and wear. Another outlet in Corso Magenta 17.

.:. Furla
Bags of bags in all the latest trendy styles from this ever more popular producer based near Bologna. Other outlets in Piazza Duomo 31 and Corso Vercelli 11.

.:. Garlando
Predominantly women's shoes in an extraordinary array of colors that allow infinite combinations. A store that appeals to the young and young-ish, big feet included.

.:. Geox
Here they sell patented shoes that claim to let your feet "breathe". Young styles. Other shops in the main shopping areas.

.:. Gucci
Flagship shop for a name that needs no introduction where you can find everything belongs to the Gucci brand: bags, clothes, shoes, eyewear... Classics and brand new lines.

.:. Hogan
The "Montenapo" outlet for the brand created, along with Tod's, by successful shoe-maker Diego Della Valle. Tod's is at Via della Spiga 22, as well as in the Galleria. The Fay brand for clothing belongs to the same group, and its men, women and kids lines are at Via della Spiga 15. The three labels are on sale together at Dev, Corso Vercelli 8.

.:. Luca
Sophisticated but comfortable footwear for men and women, displayed in a store that is decorated entirely in fine marble.

.:. Mauro Leone
Definitely not your usual women's footwear on an industrial scale. This is the most recent and most central Milanese shop of a fashion designer with a family tradition from Biella (Piedmont). Style doesn't affect price too much. Also custom-made shoes, and an online store. More outlets at Corso di Porta Ticinese 60 and 103.

.:. MH Way
Synthetic materials only for these bags, tote bags, briefcases, in assorted shapes and sizes, featuring simple but interesting technical solutions. Produced on the outskirts of the city, they are the work of Japanese designer Makio Hasuike (hence the name), an otherwise little known genius of the real Milanese industrial design scene.

.:. Pantofolaio
A wide choice of colored slippers - and slippers only - for the whole family. The youngish line is in Via Mercadante.

.:. Salvatore Ferragamo
Manufactures, since 1926, shoes for any type of foot. The legendary American producer, Cecil B. De Mille, and the glorious Greta Garbo wore Ferragamo shoes. Wedge-heel shoes were a Ferragamo invention back in the 1930s. There is also an infinite variety of accessories in leather and classic apparel for men and women. The men's line is in Via Montenapoleone 20/4.

.:. Tutto per lo sport
A 'historic' shop for sports shoes and sports goods, particularly mountain equipment. It was originally located right opposite, at No. 52, and here at No. 51 the accent was on rather less sporty casual wear. Now is all together at No. 51.

.:. Valextra
Itself an authentic Milanese tradition, Valextra is famous for wallets and small leather goods, some of which are patented (the rigid key-rings, for example).