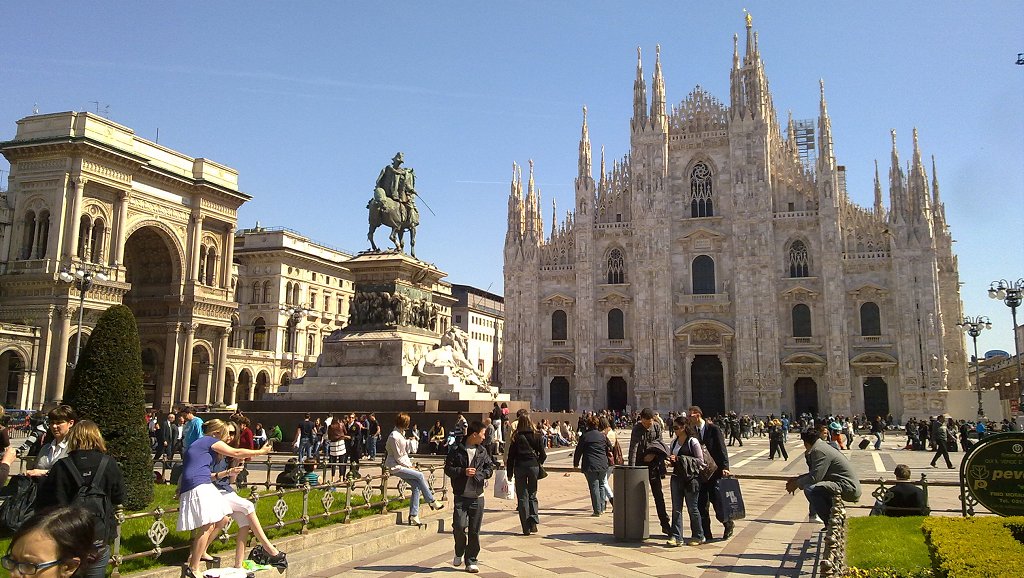 
The core of Milan is unmistakably the cathedral square, or Piazza Duomo, with the spectacular cathedral, or Duomo. This has been so since the Dark Ages, when an Early Christian church already stood here. Only the scale of things has much changed since.

Thousands and thousands of people still cross the square every day, strolling between the 19th century Galleria Vittorio Emanuele II - dedicated to the first king of Italy, as is the monument portraying him on horseback - and, opposite, the 18th-century Palazzo Reale, with the modern twin buildings of the Arengario protruding into the Piazza. One of the Arengario buildings has hosted since 2010 the Museo del Novecento, a museum of modern art.

From here, you're most likely to walk down the nearby, always crowded Corso Vittorio Emanuele II.

In Piazza Duomo you find Milan's most important tourist information office. You enter it through one of the doorwasy to Palazzo Reale.

Around Piazza Duomo
Historically speaking, the area around Piazza Duomo includes at least three very prominent buildings. If you turn your back to the cathedral and walk straight across the square to its far right corner, you cannot miss Via Mercanti, where the 13th-century Palazzo della Ragione has survived since Milan's medieval period of self-rule.

Then return to Piazza Duomo and head for Via Mazzini: the small Renaissance church of Santa Maria presso San Satiro, a manifold masterpiece, will be waiting for you.

Lastly, very close to Piazza Duomo, an outstanding testimonial to Milan great traditions in the patronage of the arts reopened to the public in 1997, after seven years of restoration funded by the Milanese savings bank par excellence, Cariplo. It is the Ambrosiana.