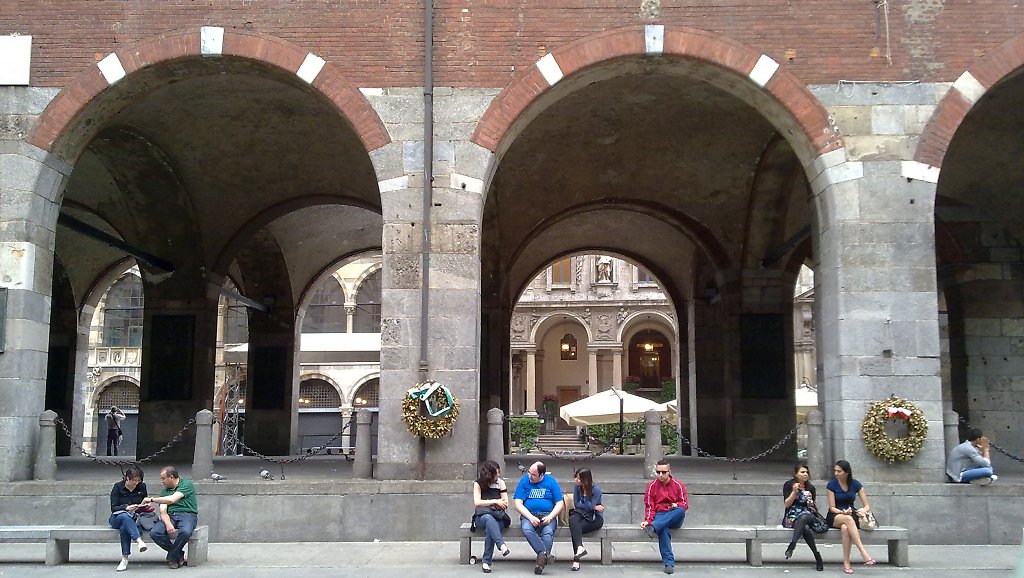 
In order to fight any further diffusion of Covid-19, people are advised to be very cautious when meeting others. A distance of a meter or so must be kept - and a face mask (better if surgical) worn when being indoor - in case of any personal encounters.
.:. Though Milan and Lombardy are still at risk, some behaviours are allowed. Starting from Monday, June 14 not only shops are at work, and bars and restaurants may serve outdoor (indoor, six people max at the same table), but also museums, theaters and cinemas operate again. Curfew suspended.
.:. Official news at the YesMilano website.


Built between 1228 and 1233 by order of the podesta Oldrado da Tresseno, this building was intended to be an autonomous seat for the independence that Milan had won during the 12th century in its struggle against the German emperors.

At that time, the Palazzo della Ragione was made up only of the ground floor gallery and of the great hall used by judges and for assemblies, which is at the height of the three-light windows.

For centuries the palazzo was the law courts of Milan, until the time when the Holy Roman Empress Maria Theresa transformed it into an archive for notarial deeds. It was then (1771-73) that the Palazzo della Ragione was enlarged with an elevation with large oval windows.

A strange relief on the portico towards Via Mercanti might be the reason for Milan to be anciently called "Mediolanum".