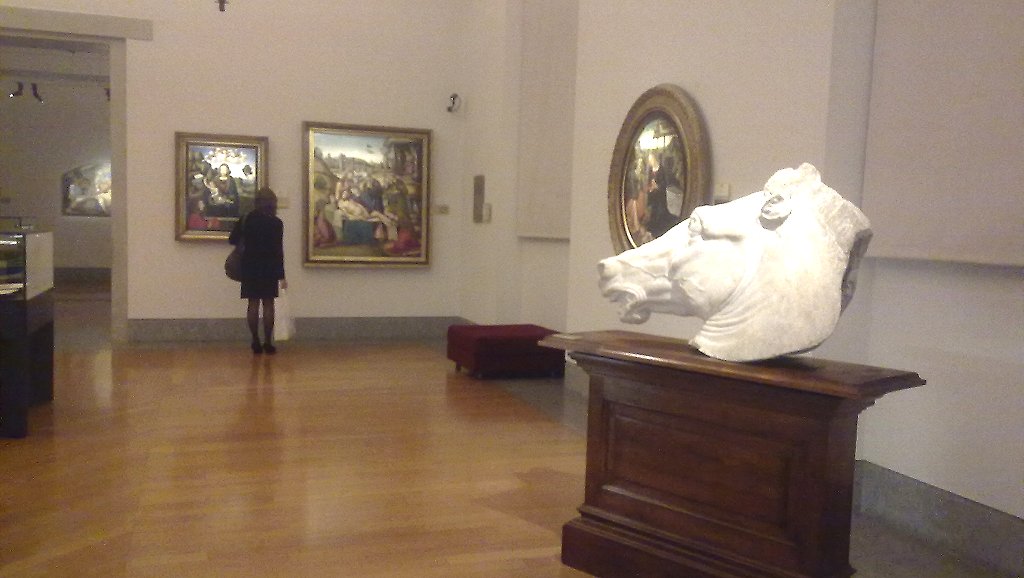 
.:. In 1609 Federico Borromeo, Cardinal and Archbishop of Milan, arranged here - in a building constructed ad hoc to projects by Fabio Mangone and Ricchino - a grand collection of ancient manuscripts, parchments and books. He had himself commissioned their collection throughout Europe and the Middle East.

.:. #Milanese
Since then the initial combativeness in ideological matters has obviously mellowed considerably, while the collections have steadily grown in scope and size. Today the Ambrosiana is a private and autonomous ecclesiastical foundation, directed by four scholars and by a Prefetto (curator-in-chief). Its atmosphere is a peculiar mix formed, on the one hand, by awareness of being one of the most prestigious cultural institutions in the world and, on the other, by an air of familiarity typical of certain old Milanese institutions.

.:. #Cariplo
Thanks to funds provided by the Cassa di Risparmio delle Provincie Lombarde (Cariplo), restructuring on a grand scale was carried on (it ended in October 1997) making of the Ambrosiana a totally renovated and modernized complex.

.:. #Atlanticus
In the rooms are preserved books and very old prints, often extremely rare, and over 30,000 manuscripts, among which treasures of Hebrew culture and Oriental and European Bibles as well as some of the first illustrated manuscripts, going back to the 3rd century AD. There are also drawings by the Old Masters, and the Codex Atlanticus, over 1,000 pages of drawings by Leonardo Da Vinci. Consultation of most of these texts is strictly for researchers, but facsimile reproductions are available.

.:. #Art
The Ambrosiana art gallery, or Pinacoteca Ambrosiana is more readily available to non-professionals. It is apparent that Cardinal Federico favored 16th-century Venetian painters as well as his own Lombard contemporaries, and that he had a predilection for Dutch culture. Subsequent donations have, nevertheless, broadened the Pinacoteca's scope.

.:. #Renaissance
We will list some of the greatest artists whose work is among the collections here. Tuscan Renaissance: Botticelli, Ghirlandaio, Leonardo da Vinci (The Musician); Lombard and Venetian Renaissance: Bartolomeo Vivarini, Bergognone, Luini, Bramantino, Leonardo's school.

.:. #Raphael
Besides Raphael's enormous cartoon for his School of Athens in the Vatican, the gallery has works by Magnasco, Tiepolo, Caravaggio (Basket of Fruit), Barocci, Moretto, Tiziano, Bassano, and the typical 17th-century Lombard painters Tanzio da Varallo, Cerano, Daniele Crespi.

.:. #Brueghel
The main Dutch works of this collection are by the primitive Geertgen tot Sint Jans (Virgin and Child), and by Jan Brueghel, who was a personal friend of Cardinal Federico: this series of small paintings by Brueghel is one of the gallery's true gems.