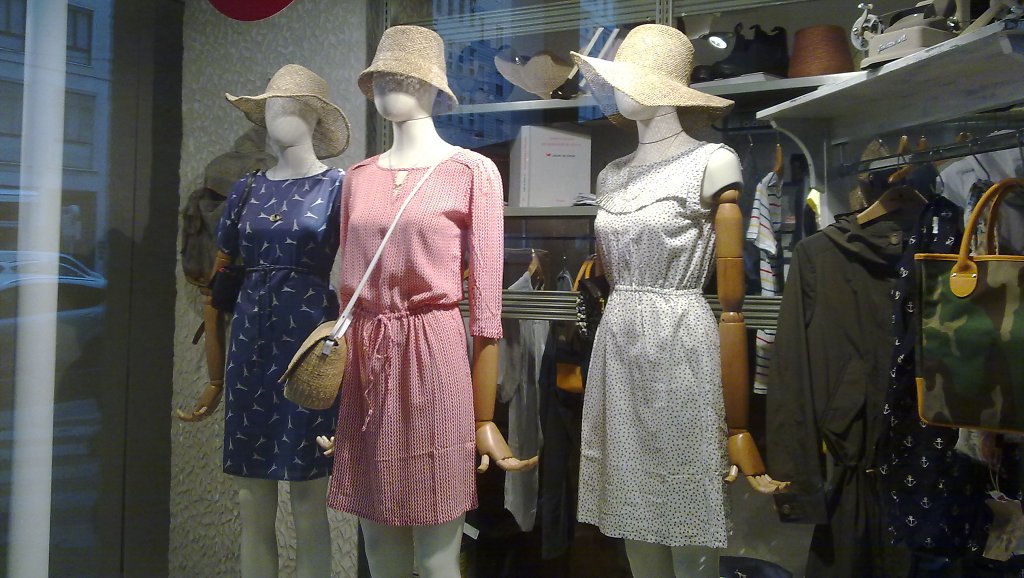 
.:. Agnona
Lovers of camelhair, alpaca, mohair and cashmere will be spoilt for choice when making purchases here. Lots of shawls, sweaters and gorgeous blankets, as well as ready-to-wear apparel. Another shop at Via Sant'Andrea 11; showroom at Via Stendhal 36.


.:. Armani
A small department store, offering the Emporio, Jeans and Junior lines as well as Giorgio's collection for the home, plus books plus flowers plus cafeteria plus sushi etc. More Armani shops in town are at Via Monte Napoleone 2 (Boutique), Corso Venezia 5 (Collections), Via Spiga 19 (Accessories), Via Sant'Andrea 9 (Home), Corso Vercelli 8 (Cosmetics) and at la Rinascente in Piazza Duomo.


.:. Brioni
You don't have to go to Rome anymore for a tailor's made suite by the name who pioneered the Italian Style back in the 1950s. Beloved by actors and monarchs, Brioni's shop is a men's outlet.


.:. Brunello Cucinelli
The Milanese flagship store of the famous fashion entrepreneur from Perugia. Cashmere was the original love in the late 1970s, but now Cucinelli's billion-Euros empire has gone global both geographically and materially. Don't worry, though, a sober portrait of Socrates still hangs in Cucinelli's personal office.


.:. Dolce & Gabbana
A crescendo of popularity in the last few years for this couple of youngish designers - Madonna's favourite. The huge boutique was designed by the Brit David Chipperfield. Women's outlet at Via della Spiga 26; then, there's D&G at la Rinascente department store.


.:. Ermenegildo Zegna
Everything in the way of menswear, from dinner jackets to sailing attire, designed and made by one of the world's best and best known producers of yarns.


.:. Etro
Wood, silk and cashmere provide a magnificent backdrop - amid winged horses (Pegasus is their logo) and paisley designs (their specialty) - for mens- and womenswear, leather goods and fabrics. Perfumes in Via Pietro Verri, corner Via Bigli.


.:. Gucci
The Milanese flagship store of the distinguished maison from Florence. Women and men clothing as well as shoes, bags, watches and jewels. Kids are also considered. Regularly open on Sundays, too.


.:. Mila Schön
A traditional name of Milanese fashion, this haute-couture house is famous for its elegant matching separates. Showroom in Via Solferino, Brera district.


.:. Missoni
Sweaters, reversible cardigans, raincoats, as well as tapestries and furnishing fabrics. The beautifully designed shop is alone worth a visit.


.:. Moschino
Out to shock no matter what it takes, their style is loudly broadcast with head-turning combinations for fabrics, colours and general store layout too. Another shop at Via Sant'Andrea 12.


.:. Prada
This is the ladies-only store of the successful Milanese she-designer. Other Pradas at Via Monte Napoleone 6 (men), Corso Venezia 3, Via della Spiga 18 and Galleria Vittorio Emanuele.


.:. Roberto Cavalli
The main Milanese outlet of the Florentine designer and his "animal brand," as fashion experts define it. The Just Cavalli line is at la Rinascente, and a Just Cavalli Café under the Torre Branca.


.:. Sermoneta
From Rome, a name now synonymous with gloves, of every possible kind and color.


.:. Valentino
Valentino was the first to unite the worlds of art and fashion with his famous show at the Metropolitan Museum in New York in 1982. Beautiful high fashion apparel for men and women made with fine materials in classic colors and sophisticated styles.


.:. Versace
Four floors of menswear, womenswear and accessories to choose from. Versace was a master at seeking out new materials and applying experimental techniques to familiar fabrics. He collaborated with the Scala Opera house on costume design for several ballet productions.