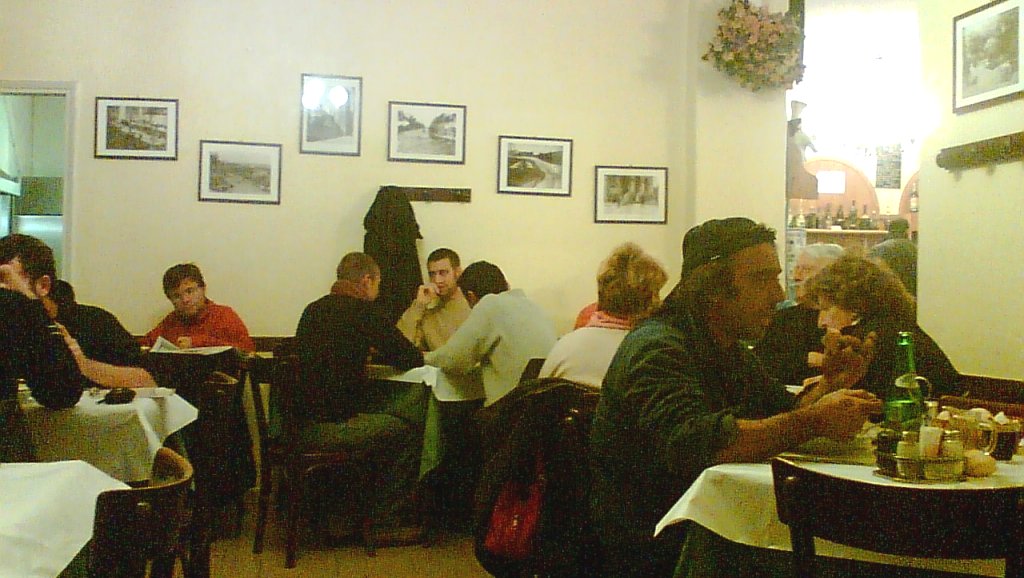 In case you venture into a local cuisine restaurant

.:. Gastronomic traditions are best preserved by the people who belong to the culture that originated them, but as this culture changes in time under the influence of new social customs, so the gastronomical traditions lose their identity. This is happening to Milanese gastronomy which is beginning to have to be protected in order for its specialties to survive.
Some of the Milanese dishes have actually become common in Italian cuisine: the cotoletta alla Milanese has even crossed over the national borders and is a popular dish in Germany where it goes by the name of Wiener Schnitzel. But other dishes, such as rostin negàa or cassoeula, have to be tracked down in the homes of the inveterate Ambrosiani.

THE ‘PRlMO’
Trippa. Tripe boiled with oxtail, onions, celery, carrots, sage, red kidney beans and tomatoes.
Minestrone. Typical rice soup, with pigskin, bacon fat, tomatoes, potatoes, carrots, celery, red kidney beans, sage, parsley. You can eat it either cold or hot.
Riso e prezzemolo. Rice soup to which a generous handful of parsley is added just before serving.
Riso e rape. A thick rice and turnip soup, which also has bacon fat among the ingredients. It is served with plenty of grated Parmesan cheese on top.
Zuppa di cipolle. This is a very close relation of the French soupe aux oignons.
Zuppa Santé. A soup made with a variety of vegetables, served with bread croutons fried crisp in butter.
Risotto alla Milanese. This is a typical risotto cooked with saffron, which gives it its bright yellow color. Following the oldest Milanese tradition this risotto is served as a main dish together with ossobuco.
Risotto con le rane. Prepared with the ‘meat’ of sautéed frog’s legs.

THE ‘SECONDO’
Asparagi alla Milanese. Boiled asparagus - firm, not limp - served with eggs (sunny side up), all covered with hot melted butter.
Bolliti misti. Mixed boiled meats, typically various cuts of beef, calf’s head, capon, often also cotechino (a kind of spiced pork sausage). The garnish may be boiled vegetables, green sauce, or mostarda.
Cassoeula. Great specialty of the Milanese tradition, it is a typically wintry dish made up of many ingredients. Spare ribs of pork, pig’s trotter, pigskin, sausage, savoy cabbage, wine, vegetables, all of the ingredients stewed together for several hours. It may be served with polenta.
Ceci e tempia di maiale. A filling dish based on chick-peas and pork, cooked with other vegetables and served with grated Parmesan cheese.
Fritto misto alla Milanese. Brain, marrow, lung and liver (veal’s) are cut in slices and sautéed in oil or butter. Usually served with mushrooms, artichokes, or zucchini.
Lumache alla Milanese. Snails, boiled and then prepared with anchovies, flour, parsley, fennel and white wine.
Ossobuco. Veal shin bone chops with bone and marrow in the middle. They are fried lightly with flour and butter, and then cooked with wine and tomato pulp; shortly before serving they are sprinkled with gremolata (finely chopped garlic, lemon peel and parsley).
Mondeghili. Milanese variant of meatballs; minced boiled or roasted meat, sausage-meat, liver, Bologna sausage, parsley, garlic, grated Parmesan cheese, bread, all mixed and fried in butter.
Polenta pastizzada. Oven-baked pasticcio made by alternating layers of polenta with a white sauce (béchamel) enriched with mushrooms and sausage-meat.
Rane in guazzetto. Frogs fried in a pan with butter, wine, broth and finely chopped garlic and parsley.
Rostin negàa. Veal cutlets pot-roasted in butter, with wine, bacon, rosemary, sage and lemon.

DESSERTS
Laciaditt. Sweet griddle cakes with apple slices.
Oss de mort. Almond or hazelnut cookies that Proustian madeleines bring to mind.
Pan de mej. Small sweet buns with elderberry; they are generally served with a cup of liquid cream, to dip them into.
Tortelli di carnevale. Spheres of sweet dough, fried to a crisp crunch and hollow on the inside, then covered with a veil of powdered sugar.
Panettone. Originally a Milanese dessert, it is by now the most famous of all Italian Christmas cakes. It is a spongy cake that is baked in the oven and made from yeasted dough, with plenty of candied fruits and raisins dotting its airy texture. Panettone can also be filled with ice-cream and covered with chocolate.