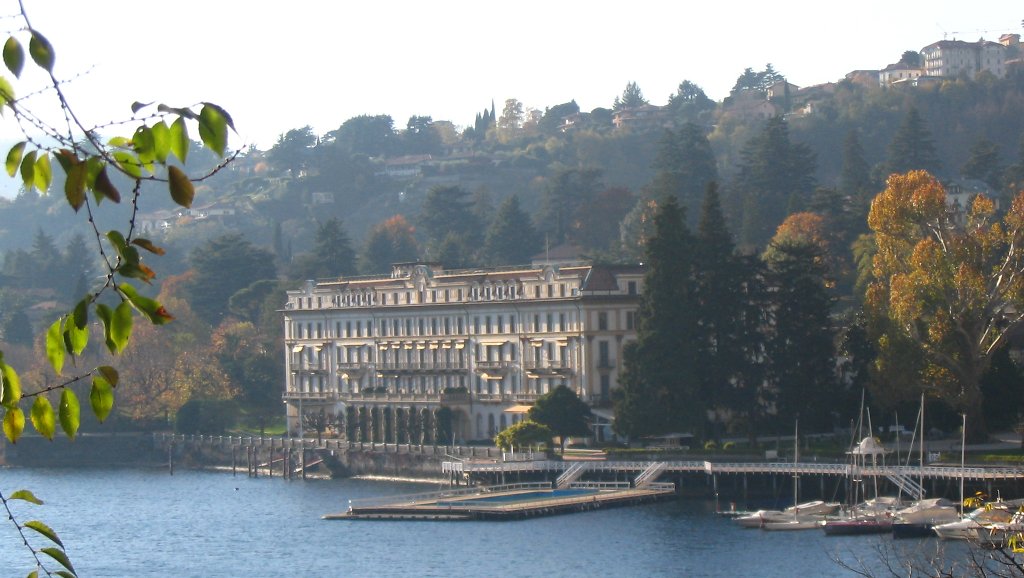 Villa d'Este  is the destination  No. 5
in our visiting tour on Lake Como. A list of destinations is available, each with an audioguide. We travel northbound, from Como to Piona.

Make your way back to the Strada Regina and continue in the direction of Menaggio. Villa d'Este is just beyond the built-up part of Cernobbio.

Villa d'Este was bought in 1815 by Caroline of Brunswick, estranged wife of the future king George IV of England. She named it "d'Este" in honour of a very distant Italian ancestor. Between 1816 and 1820 Caroline gathered a cosmopolitan, fun-loving court around her, and thus heightened the fame of the resort internationally.
The villa was built in the second half of the 16th century to a project by Pellegrino Tibaldi for the then powerful Gallio family. Initially known as the Villa del Garrovo - after a stream on the site where it stood - it was sold in the mid-19th century to the Ciani family. In 1873 its new owners found they could no longer afford to maintain the building and turned it into the present-day luxury hotel complex.
Besides its many paintings and sculptures, a particular feature of the villa is "Napoleon's Room", so called because the emperor's initial is woven into the silk wall coverings. This was done at the instigation of General Domenico Pino to celebrate the success of his Napoleonic campaigns.
There is an Italian-style garden, set out beside an avenue of cypress trees. Its ornamental features include a geometrically arranged series of alternating miniature towers, forts and cascades, ending in a nymphaeum.
The Villa now hosts many meetings and conferences: one such key event is the international business forum organized each year by the Milan-based Studio Ambrosetti.
Since 1929 the annual Coppa d'Oro Villa d'Este, the international Concours d'élégance for motor cars, has also been held there.