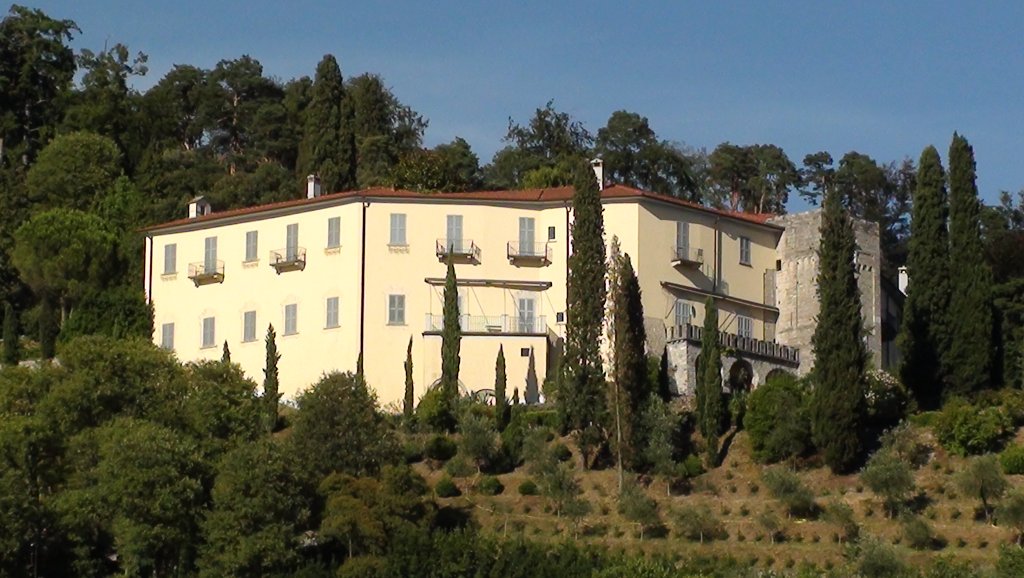 Villa Serbelloni  is the destination  No. 23
in our visiting tour on Lake Como. A list of destinations is available, each with an audioguide. We travel northbound, from Como to Piona.

The entrance to the park and gardens of Villa Serbelloni is not far distant from the church of San Giacomo.

Villa Serbelloni stands on the promontory where, according to tradition, the Latin writer Pliny the Younger had a villa in the first century AD. Here, in medieval times, there was a castle, later demolished by Galeazzo Visconti, powerful lord of Milan in the 14th century.
The villa was constructed at the end of the 15th century for Marchesino Stanga, heir of a noble Lombard family. In 1788 it was inherited by the wealthy Serbelloni family who embellished its rooms with ornate vaulted ceilings and 17th- and 18th-century artworks.
The Serbellonis also did much to enhance the vast park and gardens, planting sequoia trees and rhododendrons and installing statuary while retaining earlier ornamental features such as the grottos and waterfalls. Still clearly visible from the top of the promontory are the remains of a tiny Romanesque church: together with the medieval ruins dotted about the park, it adds an air of mystery and romance to this magical corner of Lake Como.
The villa was abandoned during the 19th century, but eventually converted into a hotel. In 1959 it became the property of the New York-based Rockefeller Foundation and has been turned into a study and conference centre.