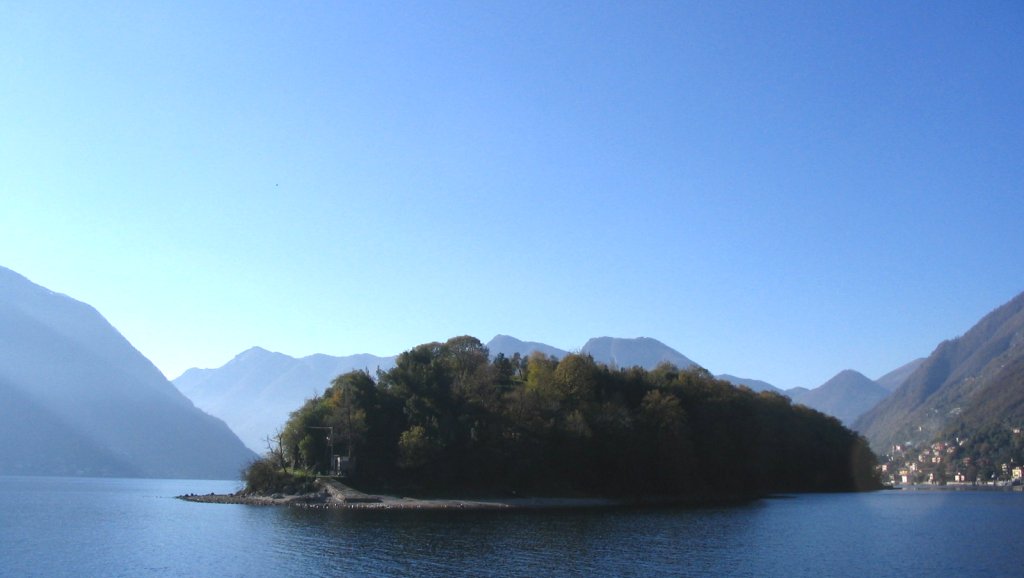 Isola Comacina  is the destination  No. 10
in our visiting tour on Lake Como. A list of destinations is available, each with an audioguide. We travel northbound, from Como to Piona.

From Laglio our itinerary heads north towards Menaggio. The Strada Regina follows the shoreline around the small bay of Argegno where on the right you will see the façade of the church of the Santissima Trinità, reconstructed on the site of a 17th-century church. Along the way you go through Sala Comacina where the landing stage for boats to the Isola Comacina is located.

There is only one island in Lake Como and the Isola Comacina has all the fascination of a timeless place, set in the peaceful waters south of Tremezzo. You can cross the island on foot in about half an hour and it's an easy walk, offering attractive glimpses of the lake as you go. There's just one café on the island, and one - fairly highly rated - restaurant. Each year around the 24 of June, the Feast of Saint John, the island is "set alight" by firework displays that tourists and locals can enjoy from the water and from the shore.
The island had fortifications in the Roman and Byzantine periods and later was a stronghold in the struggle to hold off barbaric invaders. Its homes were razed to the ground in the 12th century by the warriors of Como who punished its inhabitants for their loyalty to Milan when the two Lombard cities were each striving to gain the upper hand. Until then the islanders had lived their lives in total disregard for the fortunes of the "mainland" territories.
The Baroque oratory of San Giovanni is the only historic building still intact on the Isola Comacìna. It stands on the remains of a much older Romanesque structure, just one of seven ruined churches dating back to that period.